Somewhere under this mess is our driveway, which fell victim to a huge wind storm that swept across Melbourne’s suburbs last night.

The SES said they were expecting a horror night which thankfully didn’t eventuate, but their crews are still mopping up fallen trees all over the Dandenong Ranges.

The photo shows the top 20 meter section of a formerly 60 meter Mountain Ash which splintered and fell, taking with it a couple of smaller trees. 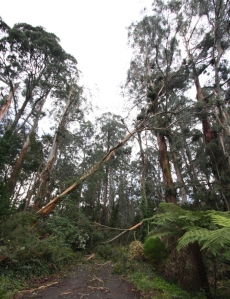 Currently perched against some smaller trees and another Mountain Ash, it could fall on power lines if the smaller trees holding it in position crack under the pressure.

Whilst the brilliant SES crew from Emerald were working their way through the tangled mess of branches sprawled across the driveway, a massive wind gust accompanied by a torrential downpour with hail shook the precariously perched tree section, taking the whole lot down and magnifying the effort required to clear it all tenfold.

Thankfully no-one was injured in the collapse.

The crew managed to clear away most of the fallen debris from the driveway by about 12:45PM, and promptly left to attend their next job on what will no doubt be a very busy day for the volunteers.

Thank you to the SES – you’re a great bunch of people. 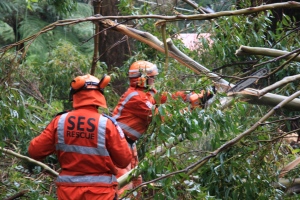 This site uses Akismet to reduce spam. Learn how your comment data is processed.

I'm a regular panellist on the 'Science on Top' podcast, on which we discuss the latest science news from around the world.

I support the United Nations High Commissioner for Refugees, safeguarding the rights and well-being of refugees who want nothing more than to enjoy the same rights and freedoms as you and I.

Please support them too.

Lily and King are a gorgeous Melbourne duo who bring me great joy. Lily creates a luring, sensual haze of smoky-opiate vocals and rapturously disrespectful trombone, while King slams a rhythmic driving junkyard of guitars and percussion. Their live shows explode with life and colour.